These lyrics from the band America’s “Tin Man” are an expression of the fact that the famous Tin Man of the Wizard of Oz already had a heart, but in Dorothy’s dream, had forgotten how to use it. The Wizard of Oz turns 80 this year, so perhaps we could spend a minute of homage here today. But I promise, no flying monkeys. I hate the flying monkeys.

But other than the flying monkeys, I loved that movie. I remember that it came on once a year (pre-VHS, pre-DVR, pre-streaming, pre-On Demand….yes, I am old) in the late summer. My entire neighborhood would shut down for an evening as families were glued to their TV sets, which were big boxy things that stood on four wooden legs. Every year we would watch Dorothy and her unlikely friends try and negotiate tornados, fallen houses, witches, poppy fields, chanting guards, and the aforementioned horrifying flying monkeys. Would she get home? All she wanted was to get home. There’s no place like home!

And then came that pivotal moment when the curtain was pulled back and the Great and Wonderful Oz turned out to be a carny huckster. No magic, no power, but he did have a hot air balloon. Dorothy woke up in her bed with her real friends around her and a greater appreciation for her black-and-white Kansas farmhouse and ragtag family.

The curtain scene always makes me think of a curiosity that happened at the crucifixion (I know…stay with me here…):

50 And when Jesus had cried out again in a loud voice, he gave up his spirit.

51 At that moment the curtain of the temple was torn in two from top to bottom. The earth shook, the rocks split 52 and the tombs broke open. The bodies of many holy people who had died were raised to life. 53 They came out of the tombs after Jesus’ resurrection and[e] went into the holy city and appeared to many people.

54 When the centurion and those with him who were guarding Jesus saw the earthquake and all that had happened, they were terrified, and exclaimed, “Surely he was the Son of God!”

What does this mean?

The curtain had separated the people from the place behind the altar where the temple sacrifices were made. Only the priest could enter this “Holiest of Holies” to present the offering and receive the atonement.

When the curtain tore, God was telling us that he would no longer be confined in a temple built by hands. He would provide access to all people. He would use the sacrifice of Christ on the cross to provide a permanent atonement for all who repent. God would be everywhere, and nothing would ever again separate us from him.

A new covenant was established:

19 Therefore, brothers, since we have confidence to enter the holy places by the blood of Jesus, 20 by the new and living way that he opened for us through the curtain, that is, through his flesh, 21 and since we have a great priest over the house of God, 22 let us draw near with a true heart in full assurance of faith, with our hearts sprinkled clean from an evil conscience and our bodies washed with pure water.

23 Let us hold fast the confession of our hope without wavering, for he who promised is faithful. 24 And let us consider how to stir up one another to love and good works, 25 not neglecting to meet together, as is the habit of some, but encouraging one another, and all the more as you see the Day drawing near.

We have an accessible God who is waiting, willing and wanting to be with us. He keeps his promises and is faithful. No curtains, no smoke, no mirrors (and no flying monkeys.) This Power is the real thing, and with it, you can turn your life around.

So let us approach the throne of grace with the courage of the Lion, the wisdom of the Scarecrow, and especially the true heart of the Tin Man. Let us hold fast to the hope the torn curtain offers. Let us be ready to encourage one another, and stir each other into acts of good works. I’ll meet you there, on the other side of the rainbow. 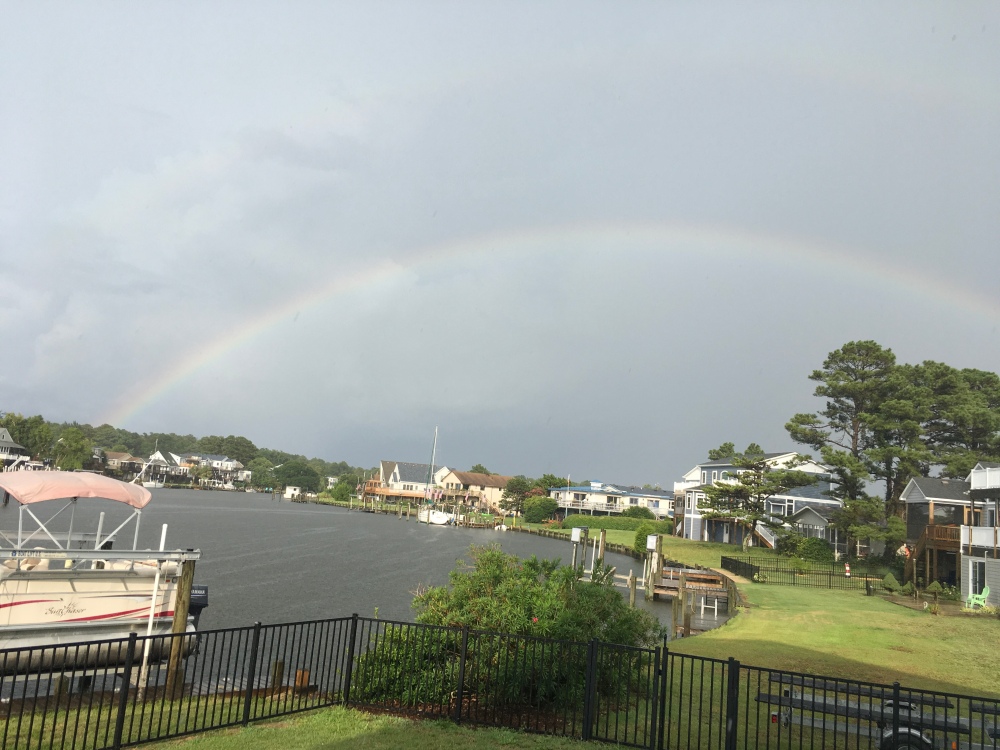 Rainbow over my backyard.