This fall, a movie called “A Beautiful Day in the Neighborhood” will be released. Tom Hanks will play Fred Rogers, the TV personality from “Mr Rogers Neighborhood,” which ran for over 31 seasons. This PBS children’s program focused on teaching simple values to America’s little ones. Mr. Rogers taught children how to handle tragedy, how to develop friendships, how to treat one another with kindness, how to appropriately express strong emotions like anger, how to handle disappointment, and especially how to be everybody’s neighbor.

His neighborhood was diverse, and included a king, a tiger, and a trolley. In one pivotal episode, he and his black police officer friend put their feet together in a kiddy pool on a hot summer day and talked about friendship. It was a stunning act of courage for the show: this was aired in the 1960’s during Jim Crow laws and the heightened controversy of desegregation and civil rights. When Officer Clemmons says he has to leave to continue walking his beat, Mr. Rogers leans down, picks up a towel, and dries off his friend’s feet.

Rogers was an ordained Presbyterian minister, and surely he knew that this act of foot-washing would leave an indelible mark on his young viewers. Maybe it would not change their parents’ thinking just yet, but the young watchers got to see “Neighbor” defined the way Jesus defined it:

Just then a lawyer stood up with a question to test Jesus. “Teacher, what do I need to do to get eternal life?”

He answered, “What’s written in God’s Law? How do you interpret it?”

He said, “That you love the Lord your God with all your passion and prayer and muscle and intelligence—and that you love your neighbor as well as you do yourself.”

Looking for a loophole, he asked, “And just how would you define ‘neighbor’?”

Jesus answered by telling a story. “There was once a man traveling from Jerusalem to Jericho. On the way he was attacked by robbers. They took his clothes, beat him up, and went off leaving him half-dead. Luckily, a priest was on his way down the same road, but when he saw him he angled across to the other side. Then a Levite religious man showed up; he also avoided the injured man.

“A Samaritan traveling the road came on him. When he saw the man’s condition, his heart went out to him. He gave him first aid, disinfecting and bandaging his wounds. Then he lifted him onto his donkey, led him to an inn, and made him comfortable. In the morning he took out two silver coins and gave them to the innkeeper, saying, ‘Take good care of him. If it costs any more, put it on my bill—I’ll pay you on my way back.’

“What do you think? Which of the three became a neighbor to the man attacked by robbers?”

“The one who treated him kindly,” the lawyer responded.

It should be noted that of the three who saw the injured man, the Samaritan was in the “enemy camp.” The injured man was apparently a well-off Jew traveling from Jerusalem, most likely after a visit to the Temple. The priest and the Levite are also thought to be traveling for the same reason, and thus they were part of the injured man’s community. Samaritans and Jews, however, had a long history of estrangement. Jews considered Samaritans to be unclean due to their intermarriage with pagans, and so they would have nothing to do with them.

In setting up the story this way, Jesus is making the point that everyone is our neighbor. He also makes the point that the way to eternity (which was the lawyer’s original question) is by living out the greatest commandments of loving God and loving neighbor. The priest and the Levite lived their lives by the letter of the law but did not understood the scope of love, and therefore could not extend kindness. When you have God in your heart, you have love in your heart. When you only have God in your head, love can’t flow. You can’t give what you don’t have. The enemy Samaritan, however, embodied the compassion that defines a good neighbor, and provided the perfect example of Christ’s commands to “Love God with all your heart, soul, mind and strength, and love your neighbor as much as you love yourself.”

The question for us today is, what would our lives look like if we truly embodied the two great commandments and acted on them? What would you do differently if you thought that eternal life hinged on acts of kindness? We know that eternal life hinges on the grace of Jesus Christ, and our acceptance of the salvation he offers, but acts of kindness are the evidence of a life lived in Christ. Are you bearing that fruit? Who is your neighbor? Or more to the point, who are you? Are YOU a neighbor?

Jesus’ message is clear here. Everyone is our neighbor. Everywhere you look, there is somebody lying half dead in a ditch. The angry drinker down the street, the troubled teenager who has a reputation for stealing, the imposing, greedy client who asks for too much, the person on the street who hasn’t washed, folks who think and act differently, and most certainly the immigrants who are currently entrapped in deplorable conditions at our border. This scripture teaches us that God’s unconditional love has no borders. Neither should ours.

Jesus calls us to love HIM by loving others. All others. Won’t you be a neighbor? 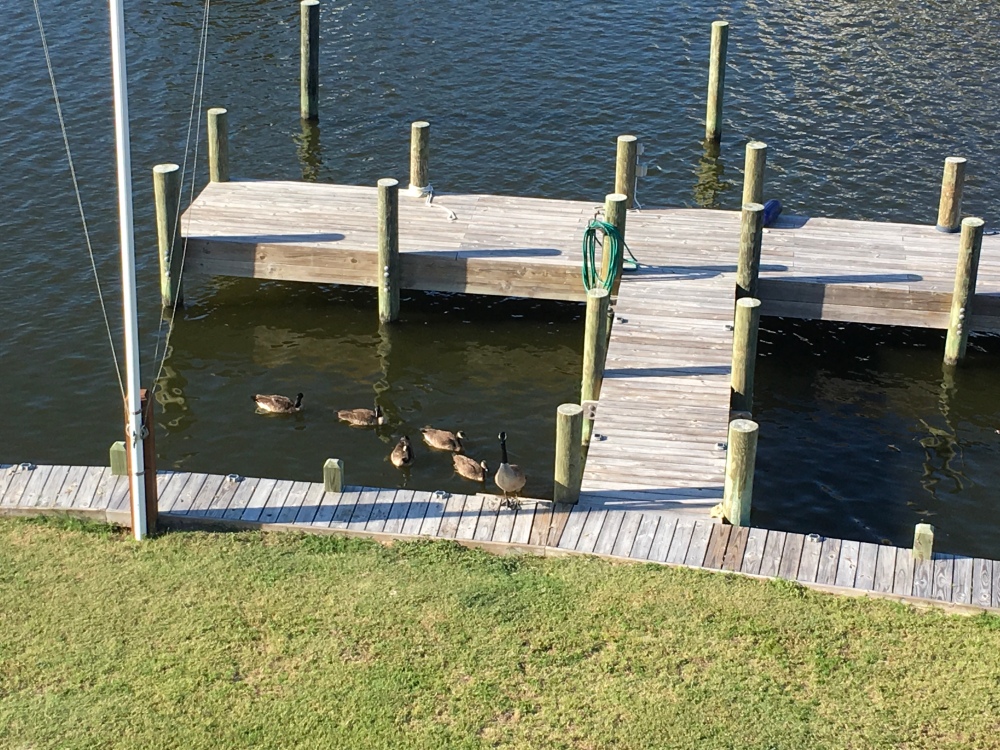 Geese lining up to use Georgia’s dog ramp. These are her neighbors, and she doesn’t like it very much. She is such a Levite!